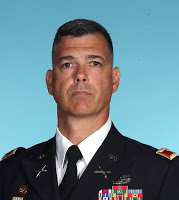 He replaces Colonel Michael Fowler who has headed the brigade since 2017.

Barcomb, who grew up in Albany, has served for more than 27 years in the active duty Army, U.S. Army Reserve, and the National Guard.

Fowler will retire following 29 years of Army service. In civilian life, he serves as the Chief Deputy for the Monroe County Sheriff’s Department.

The 153rd Troop Command is based at the historic Connecticut Street Armory in Buffalo and is the higher headquarters for the 102nd Military Police Battalion, the 204th Engineer Battalion, and the 501st Explosive Ordnance Disposal Battalion.

Normally a change of command would involve a formation of troops with battalion commanders and the battalion flags present. The incoming and outgoing commanders would transfer the 153rd Troop Command’s flag – or colors – to signify the transfer of authority.

But because of current social distancing requirements, the traditional ceremony will not be held.

The transfer will take place during a conference call with the incoming commander, Barcomb, the outgoing commander, Fowler, and Brigadier General Jack James, the commander of the 53rd Troop Command.

James would normally have presided at the traditional ceremony.

The 153rd Troop Command battalion commanders will also be part of the conference call.

“Col. Barcomb is a seasoned senior leader with a wealth of diverse professional experience,” James said. “I look forward to him taking charge of the 153rd Troop Command Brigade at a critical time for our country and our community.”

During the November 2014 “Snowvember” storm the Soldiers of the 153rd Troop command cleared snow and provided relief across the region.

Barcomb was commissioned as a Field Artillery Officer through Army ROTC in 1992. He has held various positions, including company and battalion command.

His most recent job was chief of cyber management at New York National Guard headquarters in Latham.

Barcomb deployed to Iraq in 2004 with the 98th Training Division of the U.S. Army Reserve as a Military Transition Team Leader embedded with an Iraqi Infantry Battalion.

He participated in overseas training exercises in Japan in 2008 and South Korea in 2017, and was mobilized in response to hurricanes Irene in 2011 and Sandy in 2012, as well as in response to Western New York’s winter storm in 2019.

In his civilian career, Barcomb is a Compliance Section Chief with the U.S. Citizenship and Immigration Services.

Interviews are available with Col. Barcomb and Col. Fowler. News organizations which wish to speak with them must contact Capt. Avery Schneider (avery.p.schneider@gmail.com / 917-443-1864) with the name of reporter and method of contact no later than Saturday, May 2 at 12 p.m.