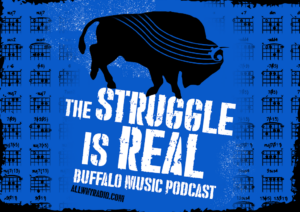 On episode #45 Part 2, Ryan and the gang finish up a two-part episode with Flowerhouse Studios owner and On the Cinder frontman/guitarist Jason Wright. They talk tour stories, Jason’s incredibly affordable studio and the issues that come with running a punk house studio and much more.

Also, Ryan has a big announcement about Struggling Productions partnering with Yace Booking. The gang asks Santa for a ton of stuff for the buffalo music scene and they play music by On The Cinder, Ian McCuen, Omeri Monroe, Shambles and Philip Stephen.

All WNY to celebrate Friday the 13th at Stamps

All WNY Awards: Time to vote