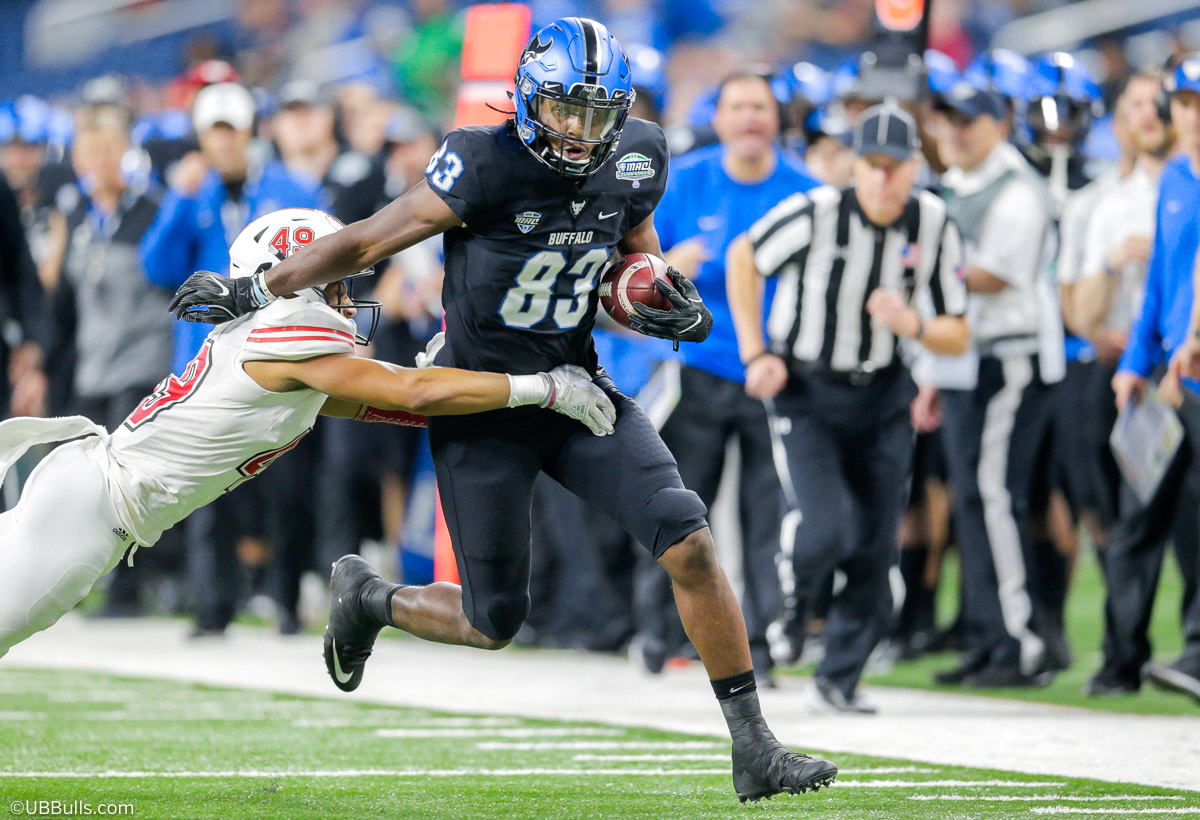 DETROIT, Mich. – Northern Illinois struck on a 35-yard touchdown pass with 1:09 remaining in the game to defeat to University Buffalo football team, 30-29, in the Mid-American Conference Championship game at Ford Field on Friday night. The final touchdown gave the Huskies their first lead of the game.
The Buffalo offense was rolling early, scoring on each of its first five possessions of the game. Each of the Bulls’ first two scoring drives were 94 yards. Kevin Marks got the Bulls on the board first with a three-yard touchdown run to give UB a 7-0 lead midway through the first quarter.
The Bulls took a 13-0 lead on the first play of the second quarter when Tyree Jackson connected with Anthony Johnson on a 13-yard fade in the corner of the endzone. The Huskies responded with a touchdown pass on their next possession to cut the UB lead to 13-7.
Jackson and Johnson connected again on a 26-yard touchdown pass on Buffalo’s next drive to extend the Buffalo lead to 19-7 with 5:41 left in the half. Following a Northern Illinois field goal to cut the lead to 19-10, the Bulls marched down the field in the closing minute of the second quarter and Adam Mitcheson made a 24-yard field goal to give the Bulls a 22-10 lead at the break.
The Bulls took the opening kickoff of the second half and marched 75 yards on eight plays. Jaret Patterson ran up the middle for a 9-yard touchdown to extend the lead to 29-10. However, those would be the final points of the game for the Bulls.
Northern Illinois scored 20 points in the final 15:17 of the contest, all on passing touchdowns to pull out the one-point victory. Huskie quarterback Marcus Childers threw for a career-high 300 yards and four touchdowns to lead the comeback.
A big turning point in the game came with just under six minutes to play when, with the Bulls leading 29-24 and the ball near midfield, Jackson called his own number and ran for 19 yards to the NIU 29. However, a holding call brought the ball back to Buffalo’s own 42-yard line. The Bulls would end up having to punt, setting up the Huskies’ game-winning drive.
Buffalo worked the ball to the Northern Illinois 41-yard-line in the closing minute, but turned the ball over on downs to end the game.
The Bulls were successful running the ball against a stout NIU defense, ranked first in the MAC. Marks and Patterson each rushed for 72 yards and a touchdown in the game.
Jackson finished with 252 yards and two touchdowns through the air. Johnson was his favorite target as the senior wideout finished with seven catches for 124 yards and two scores. K.J. Osborn added three catches for 66 yards in the game.
As he’s done all season, Khalil Hodge led the Buffalo defense with nine tackles and a sack. James Patterson had seven tackles and another of the Bulls’ four sacks in the game. Tatum Slackhad his second interception in as many games.
“This one stings and it’s going to for this group, because they’ve worked so hard,” head coach Lance Leipold said. “We have to move on. We’ll get together on Sunday and hopefully find out where we go.”
Buffalo is now 10-3 on the season and will await to see which bowl game it is selected to play in.