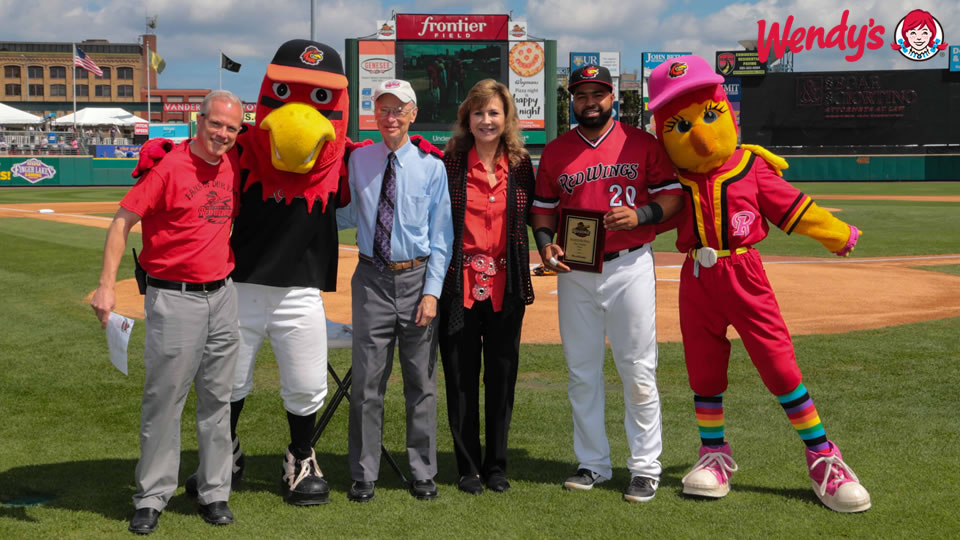 The Rochester Red Wings dropped an 8-4 contest to the Syracuse Mets Monday afternoon at Frontier Field, in the final game of the 2019 season. The loss ends a 70-70 season for the Wings, while the Mets play Scranton/Wilkes-Barre Tuesday in a one-game playoff to decide the International League North Division title.
Syracuse struck first against Rochester starter Jake Reed in the top of the first inning. After rehabbing New York Met, Jed Lowrie hit a single, Jason Krizan drove him in with a double to the left-center gap, giving the Mets an early 1-0 lead.
Alejandro De Aza continued his hot hitting for Rochester since coming off the Injured List on 8/27. He hit his fourth double of the series over left fielder, Arismendy Alcantara’s head in the bottom of the first, extending his hitting streak to 13 games, but the Wings were unable drive him in. Syracuse starter Harol Gonzalez stranded De Aza at second by striking Brandon Barnes to hold the score at 1-0.
The Mets extended their lead in the top of the second with a pair of doubles. Braxton Lee reached second with a line drive down the left field line and was driven in by Aaron Altherr who stung one into the gap to make it a 2-0 game.
Reed’s outing was done after throwing 2.0 innings, allowing four hits, two earned runs and striking out four. 38 of his 24 pitches were for strikes. He was replaced by Alex Schick, making his Triple-A debut.
Rochester finally reached the scoreboard in the top of the fourth inning. Barnes crushed his 30th home run of the season and his sixth with the Wings off the top of the video board in left field. The 450 foot shot cut the Mets’ lead in half at 2-1.
Syracuse quickly responded in the top of the fifth with a solo home run off the bat of Alcantara to make the score 3-1.
Schick finished his Red Wings debut after throwing 3.0 innings, while allowing one run on two hits. Sam Clay entered the ballgame to begin the top of the sixth and gave up a run on an RBI single from Altherr extending the Mets’ lead to 4-1.
Gonzalez finished his start with a line of 5.0 innings, four hits, one earned run, and six strikeouts. He threw 65 pitches, 44 for strikes.
The Mets pushed two more runs across in the top of the seventh against Clay. Danny Espinosa and Reuben Tejada both hit RBI singles to push their lead to 6-1 and force Clay out of the ballgame. Rochester brought on Trevor Hildenberger to face Altherr but he gave up a two-run single to increase the Wings’ deficit to 8-1.
With Hildenberger still on the mound in the top of the eighth, second baseman Yeltsin Encarnacion made an incredible diving stop to his left and made a strong throw to first base to rob Syracuse catcher Ali Sanchez of a leadoff hit. Hildenberger finished off the inning by striking out Travis Taijeron, and finished his outing going 1.1 innings with two strikeouts.
The Red Wings hitters put up a fight against Syracuse reliever Adonis Uceta in the bottom of the eighth. Encarnacion reached base with a single to left and Wilin Rosario slugged his 20th home run of the season to dead-center, making the score 8-3.
Ryne Harper came on in relief for Rochester in the top of the ninth and he threw a scoreless inning with a walk and three strikeouts.
The Wings started a rally in the bottom of the ninth against Syracuse reliever Tim Peterson. Zander Wiel reached first to lead off the inning after being hit by a pitch, followed by Drew Maggi who ripped a double into the corner in left to put runners on second and third. Mike Miller grounded out to second base bringing in Wiel from third and advancing Maggi to third. The run scored made it 8-4 but the rally came up short as Encarnacion struck out to end the game.