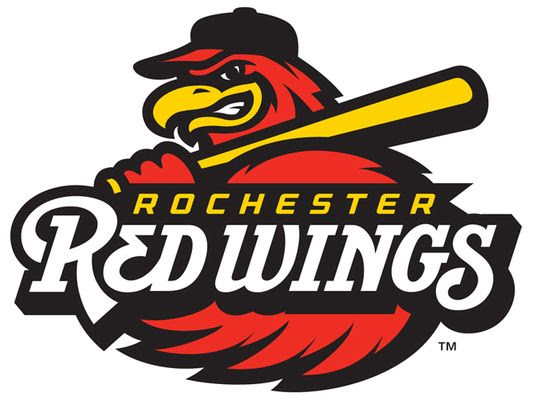 Zander Wiel’s 40th double of the season – the most by a Wings player since 1952 – helped the Rochester Red Wings beat the Syracuse Mets 5-3 Saturday night at Frontier Field. The Mets came into town in a first place tie with Scranton/Wilkes-Barre, have dropped the first two games here, and would fall back into second place if Scranton defeated Buffalo Saturday night.  The series continues with a 6:05 p.m. game Sunday, as the Wings take the field as the Rochester Hustlerswith fireworks after the game.

In the top of the first, starting pitcher DJ Baxendale gained some defensive help after giving up a leadoff walk to Brandon Nimmo. With two outs, Dilson Herrera hit a weak fly ball to center, which looked to be an RBI single. Brandon Barnes had other plans, running from his center position to make a diving catch in shallow right-center to keep the score 0-0.
In the bottom of the first, the Wings offense struck against Syracuse starter Chris Flexen on a Tomas Telis double down the right field line.  Cleanup hitter Wilin Rosario dug in and on a 1-2 pitch, recorded a RBI single to center, giving Rochester a 1-0 lead. Rosario has handled the two-out pressure well throughout the season, hitting .302 with 27 RBI, which is second on the team.
After a 1-2-3 top of the second for Baxendale, Rochester’s offense continue to churn out hits. Zander Wiel started the inning with his 40th double of the season, the first Red Wing since Don Richmond in 1952 to have 40 doubles in a season. Ronald Torreyes followed Wiel with a single to put runners on first and third with no outs. Mike Miller continued the hitting train with an RBI double to plate Wiel, 2-0. Rochester was not finished in the inning as Ramon Flores doubled down the first base line, scoring Torreyes and Miller to extend Rochester’s lead to 4-0. After the double, Eric Hanhold came in to pitch for the Mets, who recorded two strikeouts to end the inning. Flexen finished with 1.1 innings pitched, giving up seven hits and four runs and striking out two. He threw 51 pitches, 30 for strikes.
Syracuse cut into Rochester’s lead with two runs in the top of the third to make the score 4-2 Rochester.
After giving up a walk to start the top of the fourth, Jake Reed came in to relieve Baxendale. Reed ran into a jam in the inning with runners on first and second with one out, threatening to tie the game. Reed breathed a sigh of relief as Braxton Lee lined to Mike Miller, who then flipped to a covering Torreyes at second for the double play. Baxendale gave up two hits and two earned runs in 3.0 innings pitched for the Wings. He walked three and threw 49 pitches, 23 for strikes.
The Mets gained another run in the top of the sixth on a solo home run by Danny Espinosa, cutting the Wings lead to one, 4-3. A batter later, Rochester made their second pitching change of the night, bringing in Jorge Alcala. Reed had a strong outing in relief, giving up three hits and one earned run over 2.1 innings of work, striking out three. Alcala struggled in the inning, giving up a single and a walk to put the tying and go-ahead run on base. Alcala kept his composure on the mound, forcing another Braxton Lee double play to get out of the inning unscathed.
In the bottom of the sixth, Rochester had a prime position to extend their slim lead. With one out, Flores recorded a walk and Telis followed with a single to put two runners in scoring position with one out. Wilin Rosario struck out swinging and Alejandro De Aza grounded out to second to end the rally.
Alcala shut down the Mets offense in the top of the seventh with two strikeouts and a ground out. Rochester offense continued to hit in the bottom of the seventh. Brandon Barnes started the inning with a single. With two outs, Matt Miller recorded a single to give Rochester runners on first and second for the third time in the past four innings. The rally came to a screeching halt as Drew Maggi flew out to left-fielder Dilson Herrera, who fell down but held on to secure the out, ending the inning.
Fernando Romero came in to pitch for the Wings in before the top of the eighth inning. Alcala finished with 1.2 scoreless innings pitched, giving up one hit. He walked one and struck out two. Romero shut down the Mets offense with a 1-2-3 inning, recording two strikeouts.
In the bottom of the eighth, the Wings looked to break through for their first runs since scoring three in the bottom of the second inning. Flores and Telis led the inning off with back-to-back singles. Rosario grounded into a double play and the rally looked lost once against. De Aza came up in the clutch for the Wings, rocketing a ground-rule double to center field to plate Flores, extending Rochester’s lead to 5-3.
Romero walked a batter with one out in the ninth inning, then fanned pinch-hitter Aaron Altherr for the second out. A groundball out ended the inning and the game.