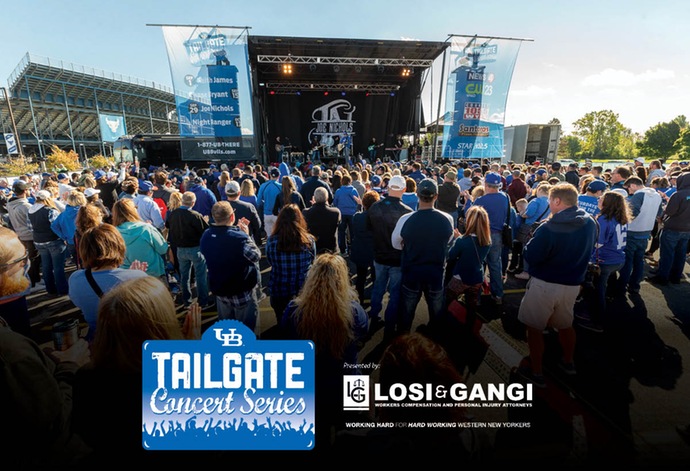 BUFFALO — The University at Buffalo’s popular Tailgate Concert Series returns for a seventh season this fall and the school has announced the acts coming to Stampede Square beginning in August. Presented by Losi and Gangi, fans will once again enjoy live music by national recording artists as well as popular local talent just 100 yards away from the south gate of the stadium two hours prior to kickoff.
Country artist and former Voice contestant RaeLynn will be performing at the season opener on August 29 against Robert Morris. RaeLynn’s songs include “God Made Girls” which reached number seven on the US Country charts. She was a contestant on the 2012 season of NBC’s The Voice.
Another country artist, Granger Smith, will take the stage on September 21, prior to UB’s game against Temple. Smith is known for such hits as “Backroad Song” which appeared on his EP “4×4”, an album that debuted at number six on the Top Country Albums chart.
Local favorites Nerds Gone Wild, an award-winning ’80s party band will perform at homecoming, prior to Buffalo’s game against Ohio on October 5. Never Ben, East Aurora’s premier party band specializing in pop, rock and blues will play prior to the October 26th game against Central Michigan.
The Tailgate Concerts take place inside Stampede Square which opens three hours prior to kick-off. Fans are encouraged to arrive early to cheer on the team during the Walk to Victory, enjoy family friendly activities and listen to live music all before kick-off.
Season tickets are only $125 and are on sale now for the 2019 season. Fans who cannot commit to a full season package should check out the MoBULL Pass, the most flexible ticket option for any UB fan. For just $100 get 10 flexible tickets to be used at football, men or women’s basketball or wrestling. For our fans eighth grade and younger, be sure to join the Jr. Bulls Kids Club. For complete ticket information click here